Metacognition is not a great word but it’s an important one when it comes to learning, especially if you are studying at higher academic levels or on your own. Cognition refers to the range of mental processes that help you acquire knowledge and understanding or more simply, learn. These processes include the storage, manipulation, and retrieval of information. Meta on the other hand means higher than or overarching, put the two together and we are talking about something that sits above learning, connecting it by way of thought. For this reason, it’s often described as thinking about thinking or in this context thinking about how you learn.

When you have a lot to learn in terms of subject matter it may feel like a distraction to spend any time learning something other than what you must know, let alone reflecting on it, but this fits under the heading of working smarter not harder, if you can find more effective ways of learning that must be helpful.
As mentioned earlier cognition is about mental processes, storage and retrieval relate to memory, manipulation, to the shifting of attention, changing perception etc. But the meta aspect creates distance, allowing us to become aware of what we are doing, standing back and observing how for example perception has changed, this reflection is a high-level skill that many believe is unique to humans. One final aspect is that we can take control of how we learn, planning tasks, changing strategies, monitoring those that work and evaluating the whole process.

Its very easy to overcomplicate metacognition, in some ways its little more than asking a few simple questions, thinking about how you are learning, what works and what doesn’t.  Here are some examples as to how you might do this.

Clearly these skills are helpful for all students but they are especially valuable when studying on your own perhaps on a distance learning programme or engaged in large periods of self-study.

There are many reasons for investing some time in this area.

It will take some time initially but, in a way, metacognition is part of learning, it’s an essential component and as such you will end up knowing more about yourself at some point, even if you don’t want to, so why not do it sooner rather than later.

I have to admit in the last few months I have spent a fair bit of time looking into the facts behind the EU and checking on some of the statements made by both the remain and leave sides, attempting to discover truths or otherwise so that I could make a more informed decision. It proved difficult; much was opinion dressed up as fact by using numbers open to interpretation. Another technique used on the face of it to offer clarity, but in reality did just the opposite, was to state the “facts” forcefully, with conviction and repeat them often, giving the impression that what was being said was not only true but believed to be true.

But this blog is not really about Brexit, well kind of, I couldn’t let the most important decision made in this country for over 40 years go without some mention.

Following the announcement of the results on Friday the 24th of June I found myself going through what Elizabeth Kubler-Ross described as the five stages of grief. Denial, no that can’t be true. Anger, WHO was it that voted like that, they must be MAD or words to that effect. Bargaining, let me break down the statistics and find out who voted and what group they came from, old/young, North/South, maybe they could be persuaded to change their minds, or better still perhaps we will have a second referendum. Depression, we are all doomed, and finally Acceptance, it is what it is, we now need to make the most of it.

What I have described above is not simply the ramblings of a disgruntled and disenfranchised supporter of the in campaign but goes some way towards illustrating the process of reflection, one of the most important components of learning and a key technique in developing a deeper understanding.  It was David A Kolb who in 1984 put forward the argument that we learn from reflecting on our experiences. 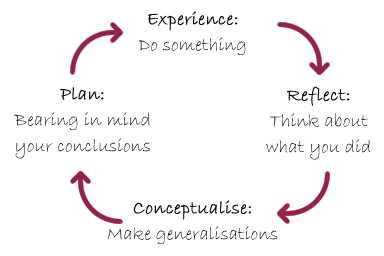 By three methods we may learn wisdom: First, by reflection, which is noblest; Second, by imitation, which is easiest; and third by experience, which is the bitterest. Confucius

Getting students to do this consciously is however difficult, in fairness I didn’t reflect consciously myself, it was part of a process in trying to understand why I was feeling the way I did. I felt angry but on one level didn’t know why, so I had to reflect on what had happened to find out.

The point being simply asking a student to complete say a reflection log, no matter how much you state the value of keeping one, will probably result in little more than blank pages. You need to have a reason to reflect, this might be to identify the cause of an emotion as was the case for me or to answer a question, which may be as simple as, “thinking back on the last essay you submitted, what have you learned?” it just needs to have a purpose. Of course the reflection log may still remain blank but that is more to do with motivation than the power of the exercise.

One simple technique to help with reflection is to think back on what has happened, identify the impact that it will have today on the present and what the implications will be for the future.

So having passed through the stages of grief, rather too quickly I am sure some will say and reflected on the experience, what have I learned? Well, some has been confirmation of what I already knew. Firstly, that Politicians will make statements that they may or not believe at the time but will back away from after the event. This can be achieved whilst still retaining an internal level of integrity by pointing out that they never used those exact words, standing in front of a bus that has them blazoned across it, is not the same. Did anyone really believe that £350m would be spent on the health service or that Europe would not trade with us at all, after Brexit. Secondly that I like democracy as long as it comes up with the answer I want, but not when it doesn’t. Thirdly, the electorate does not make decisions using in-depth analysis and reflection but by deep held beliefs built up over time, often reinforced by the people closest to them. And lastly that the status quo is not sustainable and that happiness is a comparative process thus making change inevitable and with change comes risk.

Will it be for the better, only time will tell, we will have to wait for the historians to reflect on what the UK looked like in 2016 and whether it was better in 2026, as you can see reflection has many uses!

Let me leave you with my favourite quote of the campaign, not from one of the leading politicians involved, but Abraham Lincoln.

“Elections belong to the people. It’s their decision. If they decide to turn their back on the fire and burn their behinds, then they will just have to sit on their blisters.”