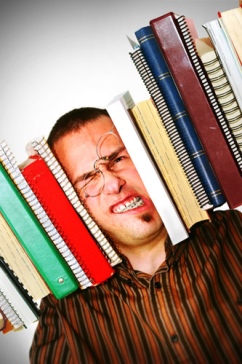 I have written about cramming before or to be precise it was in the title of a previous blog but the main focus was on the benefits of attempting exam questions. As a result, I feel I should say far more about what many students reluctantly admit is their most commonly used study method.

Cramming is the process of leaving everything until the last minute and then studying intensely in a relatively short period of time. Students know they shouldn’t do it and yet the “cramming badge of honour” is often worn with pride. It is accompanied by the boast, “anyway I work better under pressure”.

Yerkes and Dodson (Yerkes-Dodson Law) famously put rats in a maze and administered electric shocks as they attempted to choose between a black and white door. They noticed that mild shocks improved the rats’ performance until a certain point, after which it greatly decreased. A chart of the shock strength versus performance takes the shape of an inverted U. And although there has been some criticism as to the exact findings, the concept that people perform better under pressure is true but only to a point, and of course judging when that point is reached is personal and arguably impossible.

The conclusion therefore has to be that creating a stressful situation by leaving everything until the last minute is not a particularly sensible strategy. An exam environment brings its own high level of stress without you having to manufacture your own.

In June and July, I identified 6 scientifically proven learning strategies, and it is here that we can find the answer to the question, does cramming work?

Spaced practice is the process of studying over time compared with studying the same content but intensely at the end, normally prior to a test. The results as to which one is best is conclusive, spacing your learning is far better because you will not only improve what is called retrieval strength but also storage strength. The implications being that you will you be able to recall what you have learned quickly and the information will be stored waiting for when you might need it in the future.

However, studying at the end, effectively cramming also works, it has to, students have been using this method of revising since the very first exam. But, and there is a but, it only helps with retrieval strength, that is you will only be able to retrieve the information for a short period of time, perhaps as little as a day. Should you want to recall what you learned at some point in the future it won’t be there. The reason, a short burst constantly topped up will keep the information in short term memory but due to the lack of time the brain is unable to consolidate what you have learned, effectively taking it into long term memory. There is some evidence to support the view that this consolidation takes place when you are a sleep, something else that students who cram often don’t get, but that is a sufficiently large enough topic it would need a future blog.

Cramming does work for short term chunks of information for example formulas, key words that remind you of knowledge stored in long term memory, formats, illustrations etc. Simple memory techniques such as acronyms and acrostics are great and should be used, they are part of the tool kit of a professional student. But they are in addition to a more structured and spaced out way of learning, not an alternative.

Here are a few more resources.

This past blog gives specific advice – Twas the night before ………..the exam – but what to do?