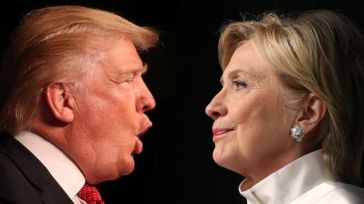 I would like to return to the idea that education has to play a part in forming an individual, their views and ultimately who they are. In April 2015 I considered the educational experiences of the leaders of the different political parties in the UK. I concluded that in my opinion, Nick Clegg followed by Nigel Farage probably had the “best” education. The logic being they had both been exposed to a variety of views, opinions and cultures, whilst many of the so-called career politicians had relatively insular academic journeys. Given the recent US elections I thought it might be interesting, post results to see how the two presidential wannabes Hilary Clinton and Donald Trump compared.

Donald John Trump was born on June 14, 1946, in Queens, New York, the fourth of five children of Frederick C. and Mary MacLeod Trump. Frederick Trump was of German descent, a builder and real estate developer, who left an estimated $250-$300m. His Mother was from the Scottish Isle of Lewis. Trumps early years were spent at Kew-Forest School in Forest Hills, a fee-paying school in Queens. From there aged 13 he went to the New York Military Academy, leaving in 1964. Fordham University was his next stop but for only two years before moving to the Wharton School of Finance at the University of Pennsylvania, from which he graduated in 1968 with a degree in economics. After leaving Wharton Trump went onto to focus full time on the family businesses, he is now said to be worth $3.7bn.

As to how good or successful Donald Trump was as a student or in fact as to his achievements whilst at school, it is difficult to establish. Trump claims he was best in his class, and yet there are no records of this being the case. What we can say is that he did not graduate with honours. In addition, some claim that the only reason he got into Wharton was after an interview with a “friendly” Wharton admissions officer who was a classmate of Trump’s older brother.

“I went to the Wharton School of Finance, I’m, like, a really smart person.”

The most telling comment, and one I will use by way of summary is that Trumps favourite lecture was from a Wharton Professor, who argued that the essence of good business was to understand the desires and even the psychologies of those on the other side of the negotiating table.

Hillary Rodham Clinton was born October 26, 1947, Chicago, Illinois. She was the eldest child of Hugh and Dorothy Rodham. Her father, a loyal Republican, owned a textile business which provided a “comfortable income”. Hillary’s mother who met Hugh Rodham whilst working as a company clerk/typist did not have a college education unlike her father. However Dorothy Rodham is said to have had a significant impact on Hillary and believed that gender should not be a  barrier.

Ambitious at one point to become an astronaut, she wrote to NASA and received a response that stunned her when she was informed that women were not accepted for the astronaut program.

After leaving Yale, she joined a small law firm, and in 1979 became a full partner at the Rose Law Firm. She was twice named in the list of “The 100 Most Influential Lawyers in America.”

And the winner is……

This is a far more difficult decision than looking at the UK leaders. There it was easier to see a clear distinction between those that had a broader educational experience compared to the more insular establishment bubble.

Of course, it could be argued that Clinton has followed this more traditional/establishment path, but she is self-made, having come from a relatively ordinary background and given the evidence has a far broader academic journey and the better academic record. Trump on the other hand was born into a very wealthy family but has made his way in the business world, much like Nigel Farage, he went to the university of life. An interesting comparison!

Perhaps the answer lies not so much in what you learned at school but in your ability to continue learning. The one that has had the best education will be the one who is willing to listen and continually learn, and on that basis, I think I know who my winner would be. For Hillary Clinton there is clearly much to reflect upon, but for Donald Trump I worry he has forgotten what learning is all about, lets hope not.